Fortified Churches Foundation (FCF): Historic buildings have played an important role in your portfolio since the beginning of your work in the field of architecture. Can you tell us where this passion was born?

Arch. Tudor Pavelescu (TP): Yes, that’s right. Most of our work at the moment is in the field of historic buildings. One of the reasons why I wanted to get the authorization to work on historical monuments was the opportunity to experiment working with traditional building techniques, and to develop an experience-based approach to architectural design. Interventions on historic buildings require a certain decency and assumption that I consider essential in contemporary architectural design. Thus, for us, built heritage is a good learning environment.

It also helps that I speak German and sometimes clients in the region are also German-speaking, and so it facilitates cooperation in setting architectural ambitions on both sides.

FCF: The fortified churches of Transylvania have been given a special role among your projects. How did they become the focus of your concerns?

TP: My interest in these heritage buildings started when I worked with the architect Dr. Hermann Fabini. At that time, we were already working on projects for Boian and Râșnov, and a large part of our project was also implemented in Șelimbăr. So we were in close contact with the fortified churches for a long time. Our concern for the Transylvanian Saxon heritage is primarily fueled by the opportunity to study historical medieval structures. Interventions to make fortified churches safe do not only involve routine repairs, but also collaboration with a wide range of specialists on issues related to the wooden roof structure, the facing, decorative stone elements.

Thus, for about three years, we have been working together with the Fortified Churches Foundation. We started with various works within the roof programme, among which I mention the intervention in Ruși, the first one carried out in the office and one of the best known buildings of this type in the Sibiu area, the one in Ormeniș, a church whose distinctive feature is the mural painting discovered under the plaster layer, and the one in Bruiu, the largest ensemble that was worked on in the office within the programme. 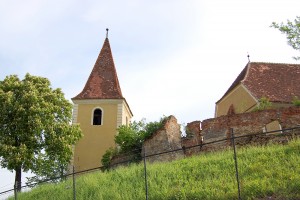 At the same time, also in collaboration with the FCF, we have launched a pilot project of adaptive reuse for the fortified church of Curciu and since this year we have taken over, adapted and completed the architectural projects of Movile and Brădeni.

TP: It’s about extending the use of existing historic buildings. In all three cases, the aim is to extend the use of the buildings for overnight accommodation. The main intention is to reactivate heritage buildings and extend their lifespan by giving them a new function, in the exceptional case where the function they served in the past can no longer be recovered. Following the exodus of the Saxons from Transylvania, fortified churches were gradually transformed from places of worship into tourist attractions, but the same change did not extend to the various annexes inside the fortifications. The programme of adaptive reuse complements the touristic character of the ensembles through minimal, context-sensitive alterations, carried out in accordance with contemporary restoration theory, with the aim of facilitating a degree of comfort that allows temporary living within the ensembles.

It is particularly important to always respect the original structure of the building and – as one colleague said – to make ‘respect for the new in the old’ a basic rule. In the case of the intervention at Curciu for example, the first project of this type that we worked on, our intention was to preserve the image of the historic front inside the fortification wall, by resolving all functions inside the three existing buildings. When it became obvious that this was not possible without certain compromises, our attention focused on a new exterior construction, which respects the boundary of the existing front, the cornice of the adjacent building, and is defined by its fragmentary image, in contrast to the typical wall architecture of the ensemble. The intervention at Movile is an example that allows the new function to be resolved exclusively within the building on which the intervention is made, in this case the North Tower. The architectural proposal focuses on not altering the volumetric of the room and the perception of space inside. Brădeni is a particular case, in which all four annexes of the fortification are being modified. 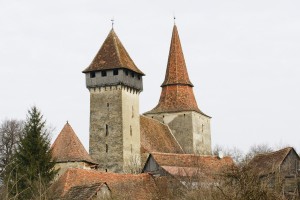 FCF: How many people in the team are involved in Curciu, Brădeni and Movile?

TP: All of them! The whole team is also very interested in this. There are currently seven of us, including me. The strategy of approaching projects in the office has changed as the team has grown, and we are currently going through the transition from working on individual projects to combining the skills and strengths of each of us to work integrated, end to end, on projects of varying complexity. It is precisely this method that allows us to tackle large-scale projects, such as the Brădeni complex, and it is these types of projects that have united us as a team. We believe that our diversity, both personally and professionally, is an advantage.

FCF: What stage are these three projects currently at?

TP: Each is at a different stage.
In Curciu we started earlier, which is why there is clearer progress there. In Movile we are working in pairs and in Brădeni we are a bigger team because there are more buildings.

The architectural project in Curciu is already ready to receive the approval of the National Heritage Conservation Commission and we hope to receive it in March.

The projects at Movile and Brădeni, were taken over by our office following a previous collaboration the Foundation had with another architecture office, will be adapted to our value systems in the reuse of historical monuments. These will also be handed over to the National Commission in February or March.

The adaptation was relatively easy, but passed through our own architectural and engineering filters that change the “face” of the project to some extent. The direct and permanent contact of the office with the reality of these types of architectural monuments allowed us to make a proposal closer to the necessary characteristics of the intervention – even if we are talking about the consolidation system, or the way of arranging the accommodation unit. Here I can mention the structural problems of Movile which needed to be analyzed and rethought several times. Once all the optimal solutions have been established, the next natural step is to obtain the approval of the National Heritage Commission, which we hope will come as soon as possible. We aspire to achieve the ultimate goal: saving and refurbishing the buildings of the two ensembles.

FCF: When do you expect these projects to enter the implementation phase?

TP: With the exception of the fortified church of Movile, Curciu and Brădeni are category A historical monuments, for which authorizations must be obtained from the national commission. So – after the political changes in Bucharest – it also depends a lot on when the commissions are formed and who signs and when. We cannot predict very clearly at this point how long this process will take. But we very much hope to start construction work in the spring at Curciu, and then by autumn at the latest to start on the other two sites.

FCF: And then what is the timetable after that? When will the project be completed?

TP: When the buildings will be restored, looking at the works strictly from an architectural point of view, we could say that it is completed. But talking about an adaptive reuse project, it’s not really finished until each building welcomes its first guests and they’re fully functional. Until then, apart from the architect, many other people are involved, and in particular the Fortified Churches Foundation team who are working in parallel on the project’s communication strategy, the development of the operational and business model, all of which require equal attention in this complex project.

FCF: What are the prospects for future cooperation with the Fortified Churches Foundation and the Evangelic Church?

TP: Our whole team is very interested in future projects in this area! After all, these are buildings of great historical value. We are very excited that we can be an example for other architects with our projects. The Foundation is an important client for us because the staff there understand the responsibility that an architect has and it is important to them that everything is done correctly and meets international standards for restoration and conservation of historic monuments.

FCF: Thank you very much for the interview and all the best!

Tudor Pavelescu is 37 years old and from Sibiu. In his hometown, he runs the Modul 28 architecture office. In terms of his work on historic buildings, he is strongly influenced by his years of training with Dr. arh. Hermann Fabini and had the opportunity to gain experience abroad in Germany, England, Italy, Spain and Turkey.