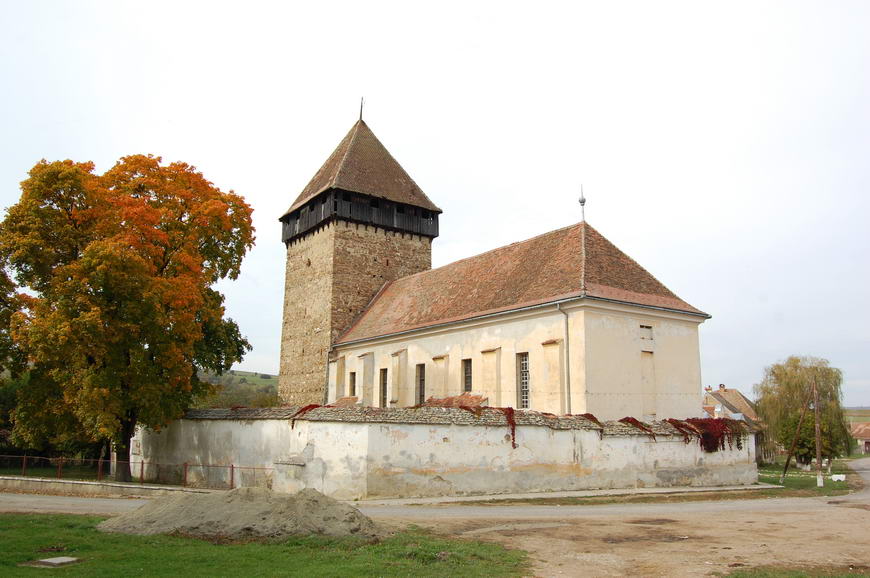 In the place of the demolished medieval church, two masters of Merghindeal built a hall church covered by suspended domes in the 19th century. The bell tower with parapet walk and stairways to the upper levels built in the thickness of the walls originates from the 15th century. It was easy for a single man to block the stairways which are only 60 to 70cm wide. The remaining fragments of the ring wall bear traces of two medieval defence towers and also boast the holes of the former beams supporting the parapet walk.

“Transylvania, proud country with powers and wealth, surrounded by the Carpathians, coated with greenery, land of gold and vineyards” – these lyrics belong to the hymn of the Transylvanian Saxons. Yet, along the history of the village, music was not always the accompaniment; sometimes the sound of weapons was heard. The Tatar attacks caused the construction of the fortified tower, a 36m high building, with 3m thick walls. Time has woven many legends around this guardian. It is said that a generous giant helped at the raising of the tower, but after the building was finished, the fearful villagers thrown him in a fountain that can still be seen in the church.
The name of the village itself is connected, as the story goes, to a spring whose name comes from the Hungarian word “Baranykur”, which means “The Lamb’s Fountain”. During a severe drought, a lamb is said to have rescued the village by discovering a spring that still exists today. The crystal clear water of this spring has quenched the thirst of the villagers for centuries and it will certainly quench the thirst of the traveler nowadays.