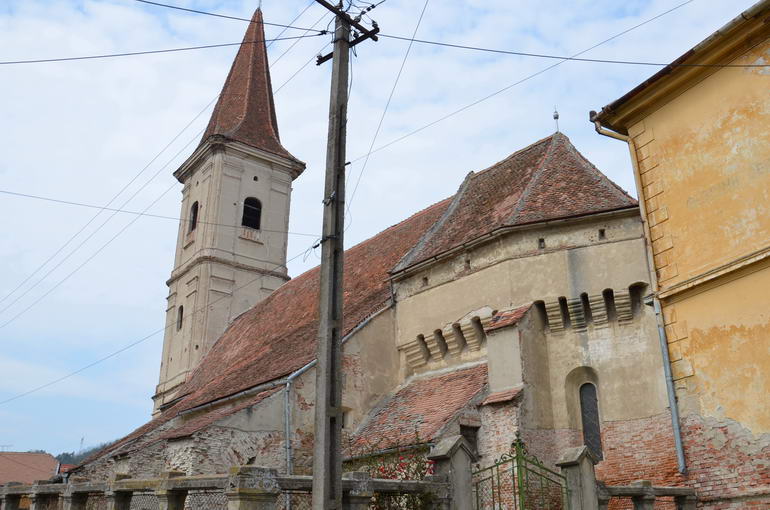 Built in the 13th century as an unfortified three-aisles basilica with apse, the church was protected through a curtain wall with defence towers since the 15th century. Later the church itself was fortified by dismantling the northern aisle. A brick-made barrel vault replaced the wooden ceiling of the nave. In place of the apse a chancel with polygonal end was erected in the middle of the 16th century. In addition it was heightened with two defence levels. Some ornamental paintings have been preserved on the outside of their walls. In the year 1800 the church was extended to the west by one third, adding the bell tower to the western facade six years later. The fortification was demolished completely 100 years later. On the eastern side the school replaced the curtain wall.
The barrel vault of the nave and the cross vault in the aisle have been preserved until today. Well worth seeing are the Baroque pulpit and the altar of 1776.

In the 16th Century Şeica Mare was a famous village in Transylvania, enjoying the privilege of hosting markets. In 1525 the king of Hungary authorized the hosting of the winter fair in this place. This was a special privilege, thus the village being under the direct protection of the king. Fairs were events of a major importance for the rural community, attracting traders, merchants, buyers and admirers from all the neighboring areas. What a colorful picture they made: decorated pottery, fabulous jewellery displayed on veils and rolls of dyed silk and delicious special dishes.
Moreover, the community of the village had the right to decide over the life and death of its inhabitants. To this purpose, a pillar of disgrace was raised, a 6m high tower with four niches to which those who were guilty for breaking the laws were tied by neck with iron chains. Even though the pillar was later pulled down, it still remains in the history of the village, according to Rosel Potoradi, as an eternal symbol of the fact that Şeica Mare once had the noble status of a free village with the right to host fairs.