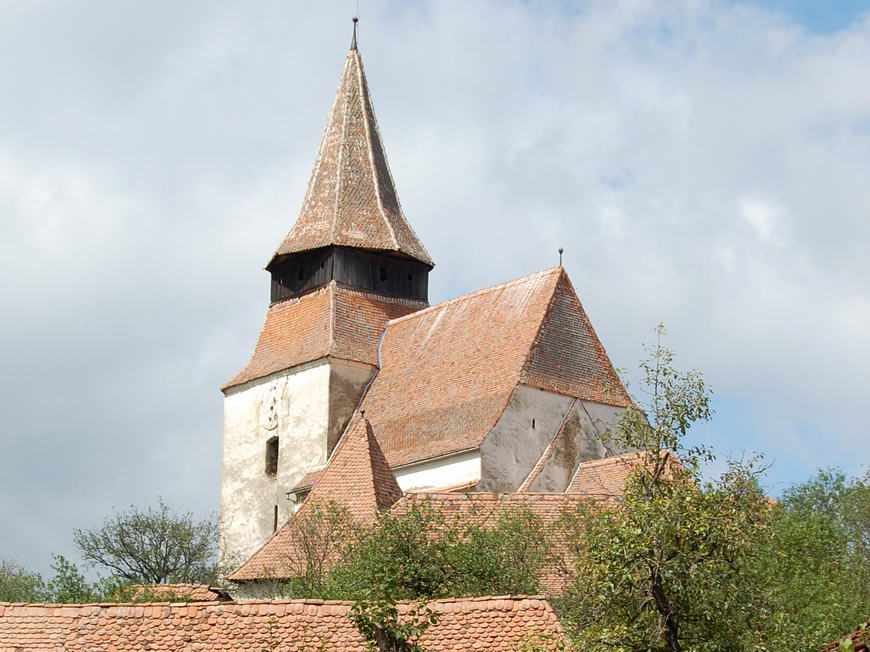 The fortification in Roadeş consists of the former aisle-less hall church with polygonal chancel and bell tower built in the 14th century. The church was fortified in the 15th century and the tower was surrounded by a massive wall, which enclosed the former open entrance atrium. The chancel and the nave were provided with defence levels on buttresses and loopholes. Sideways a two-level sacristy was built and the tower was heightened by five levels and a defensive platform. Most of the defensive systems of the chancel, nave and the tower were demolished in the 19th century.
The church was surrounded by a curtain wall with outer bailey and five defensive towers. Only three of them still stand today. The interior features a late Gothic chancel vault, a partially two-level gallery painted with images of the Roadeş church in its Baroque phase, before the demolition of its defence levels, as well as the 1838 organ. The valuable winged altar from 1533 has been moved to the Saint John’s Church in Sibiu.

In February, 2016 it came to a partial collapse of the tower.

The past has not always been kind with the village of Roadeş. It was mentioned for the first time in a document in 1356, when the villagers were accused of having looted together with the colonists of the neighboring villages the domains of the count Jakobus. In the following centuries the settlement’s name is mentioned in relation to several tax deductions due to severe destruction caused by fires. Later on, in 1496, 1523 and twice between 1552 and 1557 Roadeş was again destroyed by flames. Even in the 19th century the village wasn’t spared from arson.
Despite all these strokes of fate, the villagers have not lost their courage and kept rebuilding the settlement. Moreover already in the 13th -14th century they had built an imposing fortified church.
Nowadays, peacefully situated in the middle of an idyllic valley, the monument doesn’t bear the dark imprints of the threatening past anymore. At its foot, the Peter Maffay Foundation has built for several years a holiday home for traumatized children and youth.