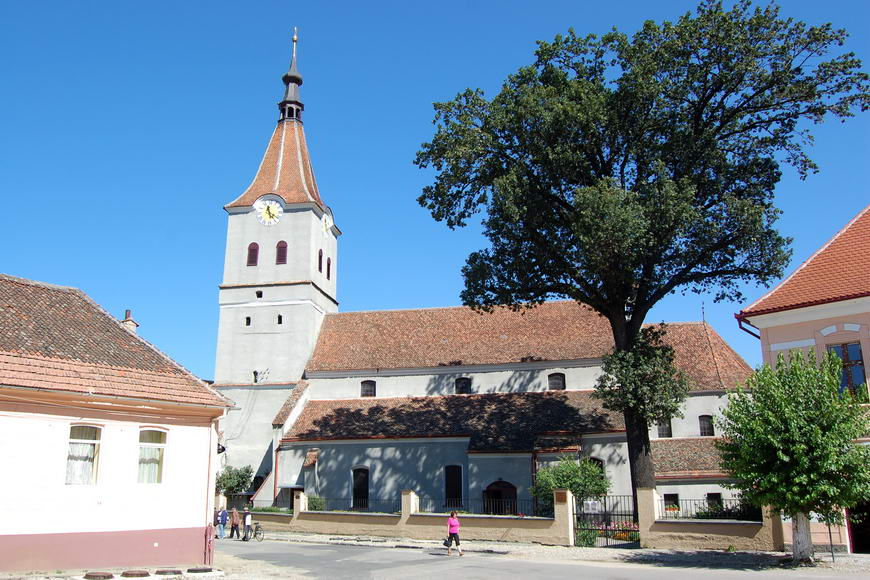 Nothing of the initial fortification systems of the church in the town of Râşnov has remained, since it was completely demolished in 1831. Today the assembly comprises an initial Romanesque basilica, which was rebuilt in Gothic style. In this regard, the aisles’ arcades were modified and the chancel was rebuilt. On the northern wall, fragments of mural paintings depicting scenes from the Passion of Christ are preserved. The tower was constructed in the Gothic phase. The interior furnishing with altar and organ originates in the 18th century and the flat ceiling was built in the 19th century.
High above the town, the villager’s fortress is to be found. Partially in ruins, partially rebuilt, the fortification is nowadays a famous tourist attraction. The oldest part was built in the 14th century, but the fortress, functioning as such well into the 18th century, was demolished and rebuilt several times. Next to the remains of a church, the assembly still preserves many fortification systems as well as several small chambers which today serve as souvenir shops and exhibition space.

“Rosenau”, the Saxon name of the town, can be translated as “The Glade of Roses”. Not only does the place have a wonderful name, but also two treasures: the Protestant church and the peasants’ castle. As a sign of peace, the defense wall of the church was demolished in the 19th Century in favor of the town hall. But the castle still watchfully guards the place from above, being dressed in its stone armor. A tour through the fortress, which hides houses, streets and even a small church, sends its visitors back in time in the Middle Ages.
The highest peak of the mountain offers a vast panorama: they say that the first colonists settled here, charmed by a suave fragrance. Looking towards the valley, they were astonished to notice that it was sprinkled with thousands and thousands of roses that bloomed full of splendor and they decided to settle here. Instead of the flowers, sound houses were erected along the years, and they survived to this day, surrounded by the legendary fragrance of the roses.

Visiting the castle:
opening times: daily 8:00-20:00h
The castle includes a museum, a souvenir shop and a restaurant.