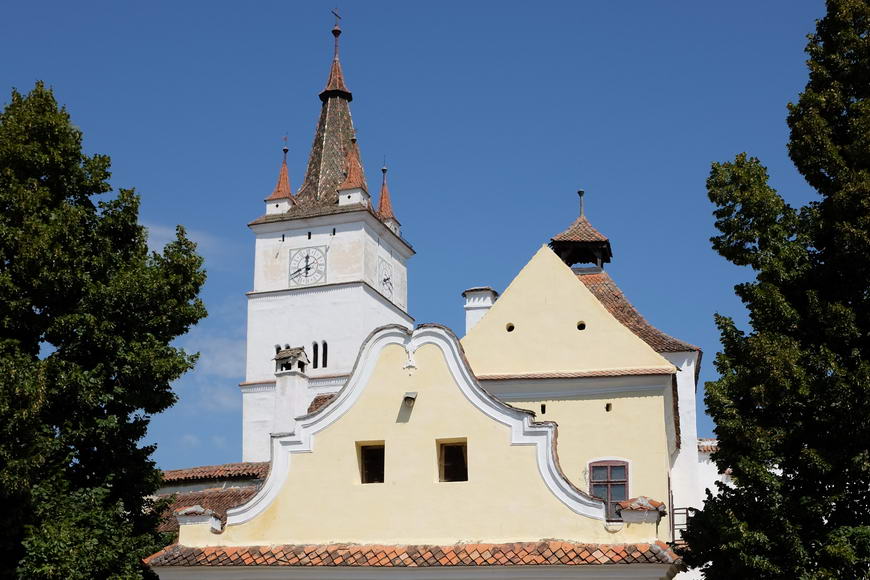 The three-aisles Romanesque basilica, already strengthened by a defence wall, was equipped with a bell tower on the western side in 1290. At the beginning of the 15th century, both the tower and the nave were adapted to the Gothic style and a second ring wall was erected. The first defence wall was heightened up to 12 m and strengthened by seven defensive towers and an outer bailey. A third wall, which did not survive to this today, surrounded the moat that was filled up in 1814. A parapet walk was built on the inside of the first defence wall, which is partially preserved today.
Remarkable are the granaries and the rooms attached to the southern side of the church. The western tower, the tallest in Ţara Bârsei, was provided with a new spire in 1794. The inner furniture mostly dates back from the 18th century. A pre-reformation chapel in the eastern tower is richly decorated with outstanding frescoes depicting the Last Judgement and the Punishment of Sinners among others . The valuable mural painting requires restoration work.

How did life in late Middle Ages look like in a besieged fortified church? In Hărman one can get a feeling for it even today, due to the numerous components restored. The fortified church was repeatedly besieged and attacked especially in the 16th and 17th Century, but it was never taken. In January 1612 the villagers even succeeded to defend the castle against a strong 7,000 men army of the Hungarian prince Bathori.
At that time the ensemble comprised three surrounding walls, a moat and many defense towers. The entire third fortification wall included storage space on the inside. Water supplies were provided by wells located within the fortifications. Living units were part of the church, which in case of a siege could provide accommodation for the mayor, the pastor and other key community representatives.Until today very well preserved remains can be visited, e.g. the powerful inner wall, the defense towers, and living as well as storage rooms in the precincts of the fortification.

Opening times:
in the summer: Monday-Saturday 9-18h, Sunday 10-18h
in the winter: daily from 10-16h
(it is possible that visiting is not allowed during certain events)