One of the most important activity segments of the Fortified Churches Foundation of the Evangelical Church A. B. in Romania is the so-called roof program. Within the framework of this initiative, important and saving interventions on the fortified churches could be carried out again in the ending year 2022.

After the German Bundestag decided four years ago to make 1.1 million euros available to the Fortified Churches Foundation via the Federal Government Commissioner for Culture and the Media (BKM) for the safeguarding and restoration of the fortified churches, a veritable wave of construction sites swept through the fortified church landscape: in the roof program of the Fortified Churches Foundation, not only the roofs in the narrower sense, but also walls and, not least, water drainage systems around the buildings are being newly repaired.

In the Sighișoara church district, the Foundation had two projects on their agenda: Ormeniș and Hetiur. After securing work had already been carried out in Hetiur last year, the roof was saved in 2022. The implementation of this work turned out to be relatively complicated because the entire roof truss had become significantly misaligned over the years. Various cracks in the masonry of the church show that the building – aggravated by the structural transitions of different construction stages – has fundamental structural problems. The roof could finally be repaired by bringing back loosened elements and stabilizing interventions in those places where it was no longer possible to restore the original condition. This also secured the location of the organ’s bellows, which are located in the roof above the choir.

More than 30,000 euros were invested in Ormeniș to restore the church roof. There, a particular challenge arose from the fact that it was necessary to open up the ceiling in the nave in order to work on a very damaged roof beam. Despite the difficult situation, this intervention could be implemented without affecting the fresco fragments in the immediate vicinity. Furthermore, the rainwater drainage at the Ormeniș fortified church was now secured by creating stone gutters around the building and by establishing culvert holes at the defense wall. For the latter, ongoing monitoring of the work by archaeological experts from Târgu Mureș was necessary. The bell tower can also be walked on again with a clear conscience. The floor was repaired in the damaged areas and a balustrade was installed.

Important work was also completed in Metiș near Mediaș. The roof has been secured for the time being thanks to the implementation of carpentry work, some of which was quite costly. Old, rotten beams, battens and roof tiles were replaced or repaired within a few weeks in September. In addition, the Fortified Churches Foundation was able to hand over a complete construction plan to the district consistory, which is the basis for further necessary interventions.

Inspecting the storage building in Bruiu

On Bruiu’s valuable southeast bastion, the roof underwent a complete overhaul as part of the roof program. This was the first important step towards saving the entire structure, which is urgently needed especially because of the rare fragments of ancient inscriptions found on the plaster of the bacon chambers.

The coffered ceiling of the Lutheran church of Valea Lungă, dating from the early 18th century, is also particularly noteworthy. In order to protect it better in the future, the ceiling was boarded up for the first time this year. In this way, the ceiling remains protected from penetrating dust or seeping moisture. In addition, this new floor will make future maintenance work on the church roof much easier. This work was supervised and accompanied by the renowned wood restorer Mihály Ferenc.

In Boz, another stage victory was achieved in the fight against bird droppings from a monument preservation point of view: By closing openings, it is now ensured that the feathered guests can no longer enter the interior. Furthermore, the badly damaged junction of the roof covering on the west gable of the church was repaired. Finally, in the Sebeș church district, the valuable church building of Vingard also underwent sustained renovation work. The sacristy 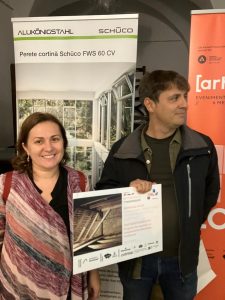 was saved by securing work, and the creation of a new maintenance corridor on the roof truss will make it easier to change damaged roof tiles there in the future.

Even though the calendar year is drawing to a close, the work is far from over for the Fortified Churches Foundation construction team. They are already thinking about the coming year. For example, the planning for structural measures in Șoarș near Făgăraș is to be completed before the turn of the year so that the stonemasonry work planned for the coming spring can be put out to tender in good time.

Appreciation of the work of the Fortified Churches Foundation

Many of the works to be carried out are becoming increasingly difficult due to the lack of qualified companies, especially in the villages. Increased prices for building materials and transport are also causing headaches for the Foundation’s monument conservators. The joy was all the greater when it was announced that the Roofs Program initiative of the Fortified Churches Foundation and the supervising architect Tudor Pavelescu (Module 28) had been nominated for the arhitectura.6 Architecture Biennial Award this year. The organizers, the Romanian Chamber of Architects, honor the best projects of the last two years from the counties of Brasov, Kovasna, Harghita, Neumarkt, Sibiu and Valcea. An exhibition on all the nominations will be presented for a few days in each of the six county capitals.