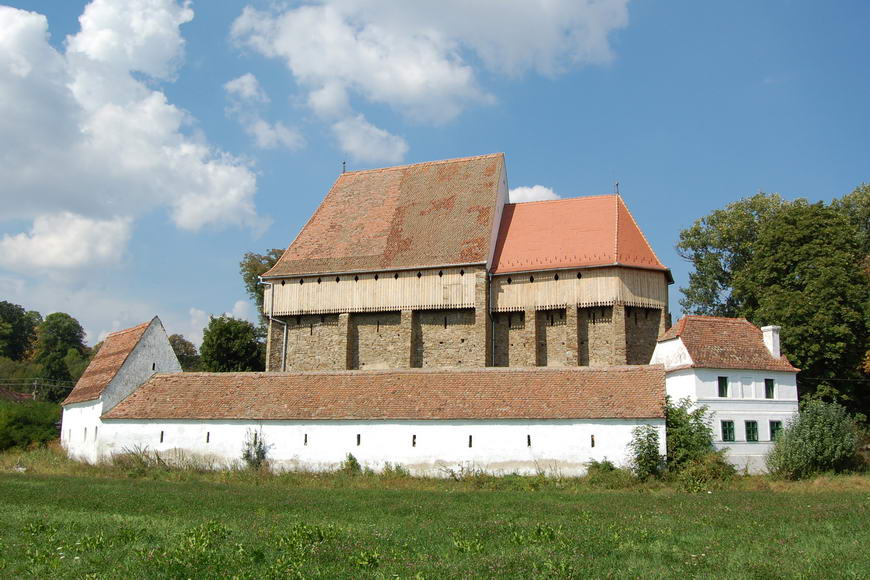 The entrance of today’s church that was probably built in the 15th century from the remains of an older church, is located higher than it was initially. The floor of the nave was also raised by 2m, due to the repeated floods caused by a water stream which flows close to the fortification and which has brought over 3m of alluvial deposit over time, both inside the fortification and around it. The defence story comprises a first level built with stone, above which a second wooden level was raised and endowed with a parapet walk on buttresses and wooden consoles.
The circular palisade that defended the church for 200 years was replaced in the 16th century by a fortified wall with defence towers.
Inside the church there is a fountain from which villagers and tourists can obtain clean drinking water.

There is a remote historical mystery flowing along with the water of Hârtibaciu river passing by Brădeni: the enigma of the more than 300 Saxon chests that secretly doze in the attic of the fortified church. Although these medieval chests hide neither gold nor other treasures in their wooden wombs, they are considered to be unique historical assets in Europe. Their age and origin cannot be precisely determined. They are adorned with mysterious paintings of fantastic beings, the style being im possible to assign to a particular epoch. Students of the course of study „Architecture, Engineering and Conservation” of the University of Applied Sciences and Arts in Hildesheim, Germany thoroughly researched and analysed the chests within the frame of a conservation project. Visitors can find out more about the work of the students as well as the history of the chests thanks to very informative boards boasted in the fortification.

This discovery is not the only peculiarity of the place. Long time ago it used to live here an earl named Kirr and his castle had a tunnel that led to the church. The end of the tunnel is still in place today. The earl is said to have buried a treasure, a clucking hen with gold-made chicken, right in the place where the shadow of the top of the church fell at noon. Nevertheless the Saxon name of the village can be translated as “The Hen’s Village” and the treasure couldn’t be found up to now.