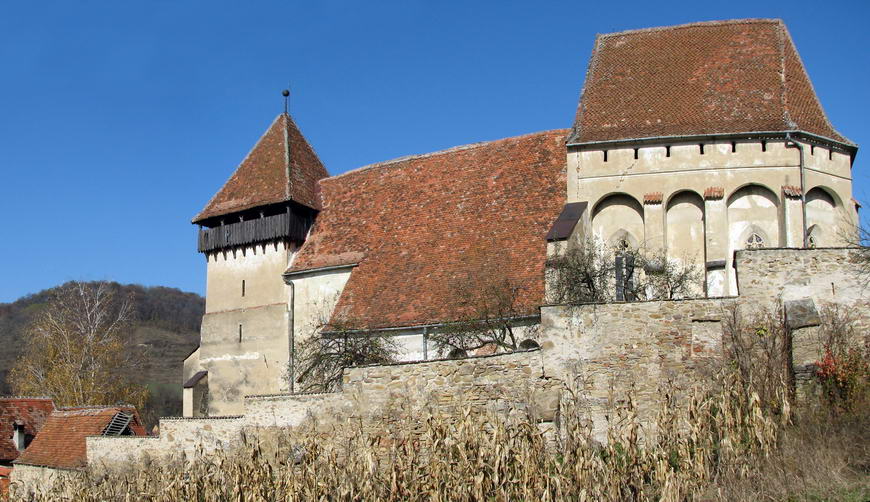 On the eastern hill above the village an early Gothic basilica with tower was first erected. Around 1510 the church was fortified, thus the old chancel was demolished and replaced by a high chancel with polygonal closure strengthened by a defence level built in stone. Due to its height of almost 11 meters and its defence systems the chancel protected the ensemble against the slope. A wooden defence level was built on the tower. The chancel still preserves its stellar vault and the fine tracery on the windows originating from the construction time of the church, but the nave was rebuilt in 1795 in Baroque style. On the northern side of the chancel stands the two-leveled sacristy dated 1519. On its second level a chapel was set up. Especially valuable are the Renaissance portal of the sacristy and the Neoclassical altar.

The place was most probably established end of the 13th Century. Already at the beginning of the 14th Century the settlers have erected a stone church, whose foundations are still preserved nowadays, despite numerous renovations and enlargements. But the houses in the village were originally built with less durable materials. The wood from the surrounding forests was in the early days the most important building material. Cracks between the logs were clogged with moss and clay, while the roofs were covered with straw resulting after the wheat harvest. The windows were closed with extensive animal bladders, allowing only a faint light to pass, which could barely spread the darkness of the rooms.
Starting with the 18-19th Century it became common to build houses out of bricks. During that time the typical Transylvanian farms were erected and they still guard aligned the paths of the village.

In 2011, the former Coordination Office for Fortified Churches, in cooperation with the district consistory Mediaș, carried out emergency repairs on the roof of the church, which were mainly financed by donations from the hometown community of Saxons.
Since August 2016 Sabine Reither has been committed to the church. In cooperation with the Fortified Churches Foundation and the district consitory Mediaș, she is working on organisation of repairs to the building. In 2020 she founded the German association Pro Groß Kopisch e.V. in order to better coordinate futurte projects and administer donations for the fortified church.

In 2018 the roof of the nave was climbed and moved. In the process, 10,000 old bricks were exchanged for traditionally manufactured plain tiles. Only the 300 ridge tiles needed had to be purchased. 54m beams and 3.700m roof battens were renewed. The junction between the bell tower and the nave was particularly difficult, as it was here that the greatest damage existed. All rain gutters, downpipes and gutters were replaced or newly installed. The sum of 15.500 Euro needed for the repair could be paid from donations. Further work is planned for 2019. 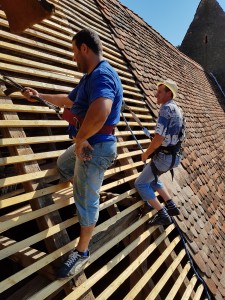 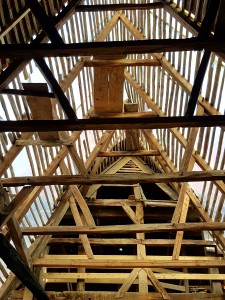 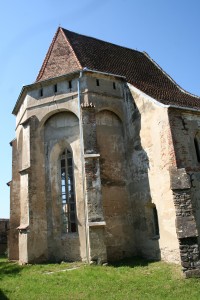 To find out more, visit the facebook-page of Copșa Mare.