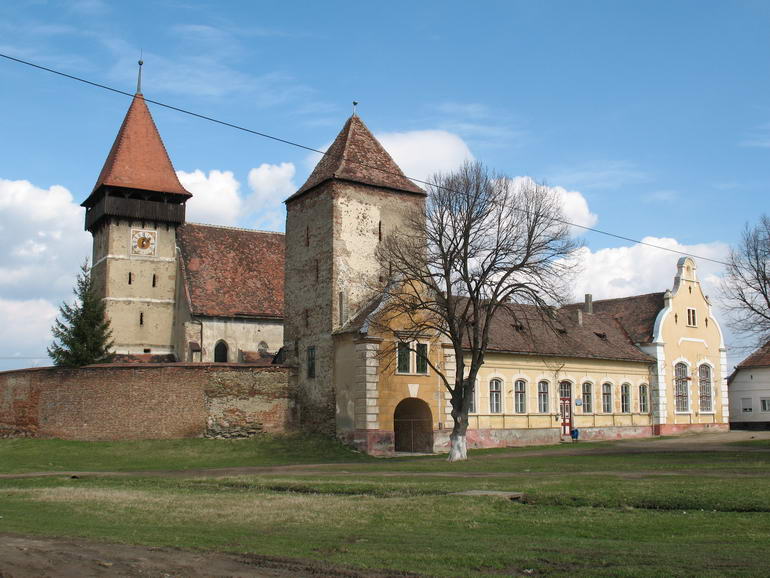 Only few remains are still preserved from the Gothic basilica of the 14th century and today’s church bears the signs of the changes it underwent in the 15th century. The aisles were subject to multiple transformations: the southern arcades were demolished and the wall was heightened. Particularly interesting are the arcades preserved on the northern side featuring profiled columns and various capitals. In order to stand against attacks, the church was fortified: a defence floor was built above the chancel and a battlement walk on the bell tower. Moreover the assembly was surrounded by defence wall with a five-level gate tower. A community house was constructed later on in 1906 by using material left from the partial dismantling of the defence wall.

On the journey through the valley of Târnava Mare, just few miles east of Mediaş appears the fortified church of Brateiu, erected in the middle of the village. The bell tower is visible from far away and from its defense level one has a magnificent view of the surroundings.

After protecting for centuries the lives and the goods of the villagers, the fortified church is nowadays part of a training center, result of a successful cooperation between the Evangelic Church A.C. in Romania and the Evangelic Church of Kurhessen Waldeck (in German language only). Starting with 2008 the craftsmen are trained here in various techniques to gain the skills necessary to properly repair the fortified churches.

At the western edge of the village towards Mediaş the copper-smiths from Brateiu present a shiny and rich offer: all kind of copper objects for various use.