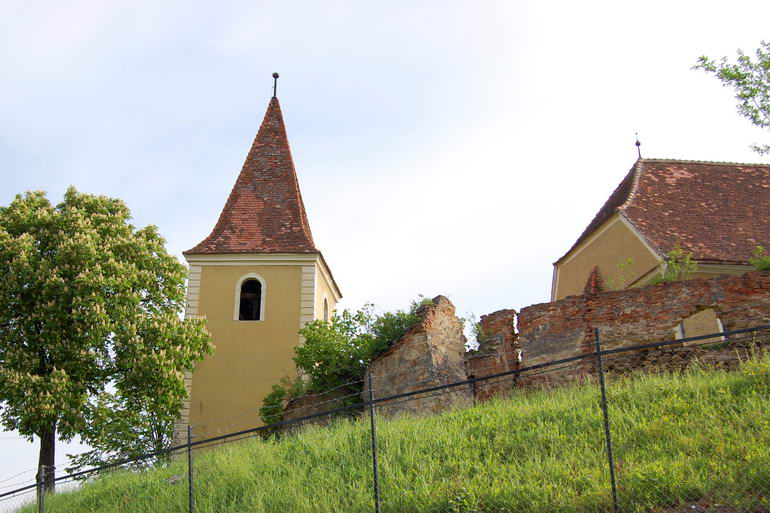 The land on which the fortified church in Ruşi was built was not very merciful to the first building erected in the Catholic time, which collapsed and was replaced by a new church in 1636. Despite many repairs, the second church also collapsed in 1780. Still the weak foundation soil, as with the well-known tower of Pisa, will bring fame to the actual church erected in 1782, whose bell tower has a tilt of 1,50 m.
The hall church with square chancel and polygonal closure is home to many valuable Baroque pieces such as the 1641 altar, the 1764 canopy of the pulpit, and the 1805 organ. In 1785 Daniel Knobloch painted the railing of the gallery with Saints and the village’s coat of arms held by two men wearing traditional costumes from Ruşi.

Pisa is famous around the world for its inclined tower, while the village of Ruşi is known only in its neighboring areas, despite the fact that its tower is more inclined than the one in the Italian city. The storm of history, the hurricane of time and the wrath of nature could not knock down this 72m giant. Built in 1748, it started to incline only a century later, after a landslide. It stayed in one piece due to its stable basis and its solid walls and today its inclination has reached 1.45m, experts estimating that it could incline for another 100-150cm before collapsing. This event is unlikely to happen in the near future due to the 1968 reinforcement works.
The history of the tower is young compared to the old houses in the village. Still it had enough time to witness the invasions of the Tartars, the attacks of the Cossacks, the invasions of the Ottomans. It is said that the village remained deserted for 7 years during the invasions of the Kurucs. The settlement was guarded in that time only by a loyal dog.