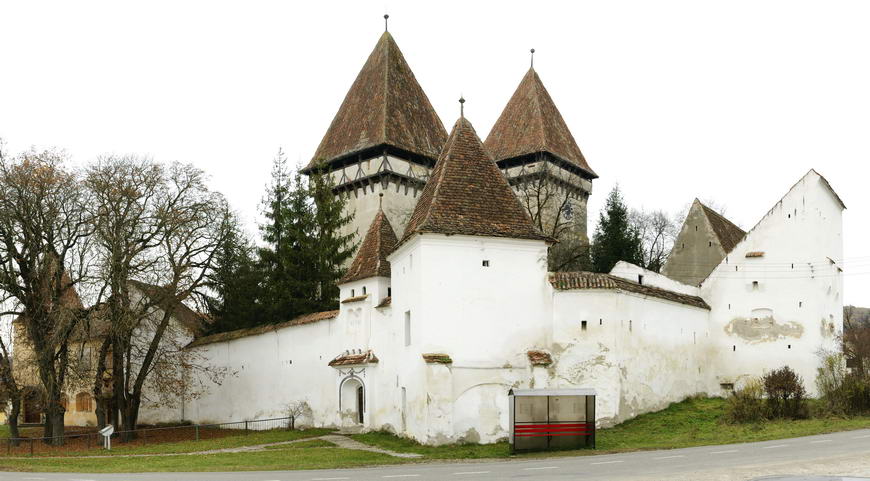 The Romanesque three-aisles basilica originated from the 13th century and was re-shaped through fortification systems in 1500. On the original tower-less church a strong dungeon with defence level was built on the western side and the square chancel was strengthened with walls in such a manner, that it was possible to build another defensive tower there. At the same time, the side aisles were heightened and the building became a hall church. The central nave and the aisles were covered with fine lierne ribbed vaults. In the course of this work the rectangular precincts wall with four corner towers were also built, possibly as a replacement for an older system. The fortified buildings erected in the 16th and 17th century were used in part as accommodation. The ensemble was completed in 1914 by the construction of the community hall on the southern side. The pre-reformation crucifix above the triumphal arch was created in 1425.

Over the wooded hills on the edge of the valley of the river Hârtibaciu one will reach the village Dealu Frumos. The well preserved and typical for Transylvania fortified church with its white walls and red tiled tower roofs can be seen from far away.
The assembly was built in the center of the village to be easily accessible for all inhabitants in case of attacks. If time allowed, the cattle were driven behind the walls too, so it would not fall into the hands of the enemy. Groceries, cereals and bacon were stored within the massive walls. In the first half of the 16th Century the courtyard had to be enlarged due to the increase of the population. 100 years later another part of the wall was moved outwards to make space for more storage rooms. The whole community carried out the dismantling and rebuilding works, while the ongoing maintenance of individual sections was assigned to the various guilds in the village.