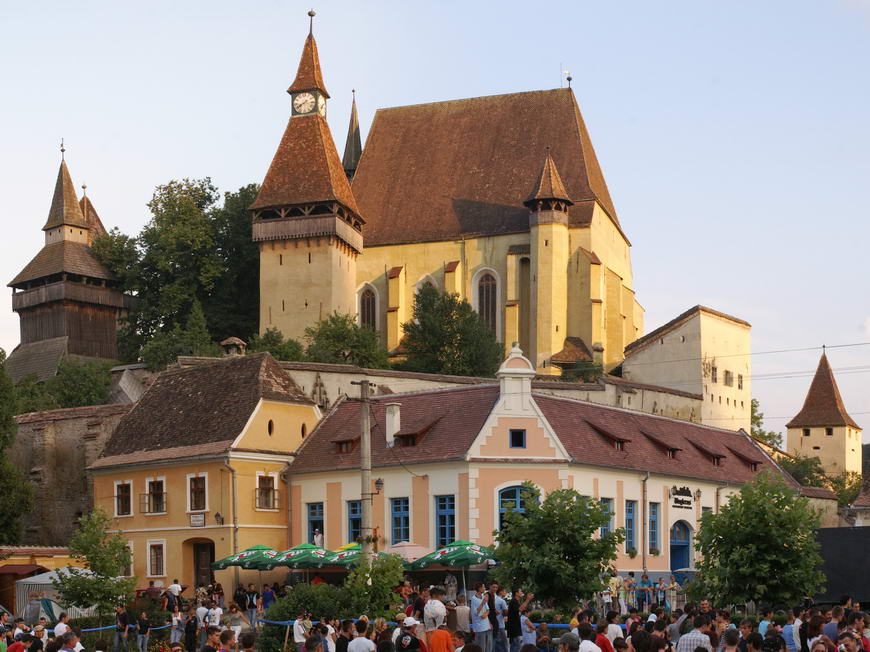 Biertan gained its importance as a marketplace in competition with Mediaş and Moşna during the Middle Ages and was the seat of the bishop of the Evangelic Church from 1572 to 1867 . Therefore three mighty ring walls, two outer baileys and several defence towers protected the ensemble.
The towerless three-nave hall church, almost completely preserved was built in 1500 on the foundations of a previous Romanesque building. The chancel had two defence levels, but the wooden one was demolished in 1803. The interior, covered by lierne vaults with ribbing shelters great treasures such as the stone pulpit from 1523, decorated with relief scenes or the late Gothic winged altar with 28 panel paintings and a delicate truss frame.
The late Gothic sacristy door is a testimony of great craftsmanship. Richly decorated with inlay work, the door has a lock that was presented at the World Fair in Paris in 1889, a complicated system that centrally locks at 13 points simultaneously in order to safely keep the church treasure in the sacristy. Especially in the 17th and 18th centuries the community leaders in Biertan (German name Birthälm) fought a harsh fight against moral decline. They tried to stop increasing misconducts with strict rules and severe penalties. For example, it was prohibited to drink in bad company, or to linger around at the inn for too long. If “premarital immoral incidents” occurred between couples, the wedding ceremony itself was conducted in an especially degrading manner.
These and many others stories can be discovered by visitors to the Biertan fortified church. The so-called “Marriage prison” for divorcing couples survived until today, but only as a building. It is located in the precincts of the Biertan castle, which is one of the most impressive and largest fortified churches in Transylvania. The church dates back to the early 16th Century and is surrounded by three fortification walls and nine defensive towers.
Once a year the meeting of the Saxons – the largest gathering of Germans still living in Transylvania and those who emigrated – takes place here.