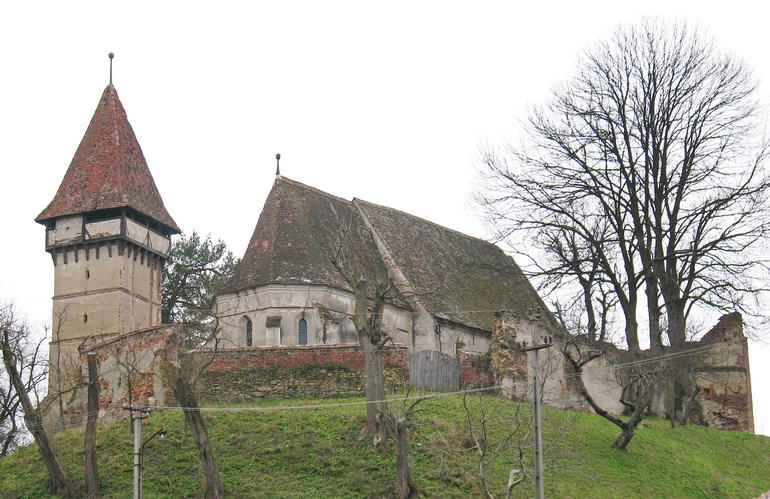 The small towerless one-nave hall church in Pelişor was built in the 15th century and has remained almost unchanged until today. Only the nave was provided with a new stuccoed flat ceiling in the 19th century. In 1500 a polygonal curtain wall was built and endowed with four defensive towers, of which only the impressive gate tower with battlement walk survived the centuries. The assembly was strengthened on its western hillside with another wall with outer bailey built in 1600. The construction is still more than 10m high and preserves several defensive systems such as loopholes and embrasures.
The neoclassical white-golden altar consecrated in 1832 dominates the interior. The late Baroque organ however was moved to the evangelical church in Bucharest after restoration.

Pelişor was documented for the first time mid 14th Century. The village’s development went smoother than in the neighboring settlements, a process that may be also explained by the small number of inhabitants: at the beginning of the 16th Century one counted only 50 families.
Many disputes occurred throughout centuries with the neighboring village of Biertan, which was fast growing. Up to the 19th Century Biertan kept claiming right on different land plots. In 1676 the Saxon Nation University, self-administrating political organ of the Transylvanian Saxons, prohibited the villagers from leaving Pelişor by threatening to confiscate all their belongings. The purpose of this undertaking was probably the prevention of residents migrating to other villages. Even so, in only 20 years one counted 15 deserted homesteads in Pelişor.
End of the 18th Century a fire destroyed part of the village as most of its houses were still built in wood. With less than 500 inhabitants, Pelişor is even today a very quiet and contemplative place. The curtain wall of the evangelic church in the center of the village represents a good example of medieval defense architecture.

Since there are no Protestant parishioners left in Pelișor, the maintenance of the fortified church has posed an increasing challenge in recent years. Since 2018, the association P.A.T.R.U. has been working for the preservation of the castle and the neighboring parsonage. The Fortified Churches Foundation supports his work.
The following has been achieved in recent years:

2018 – The association “Asociatia P.A.T.R.U.” starts its activities on site

2017 – Fortified Churches Foundation in cooperation with the Patrimonium Saxonicum Foundation: Removal of trees and other vegetation from the castle grounds (short report)

The valuable fortified church of Pelișor must be preserved!
>> read more

1st phase of work has been completed successfully (2017)
>> read more