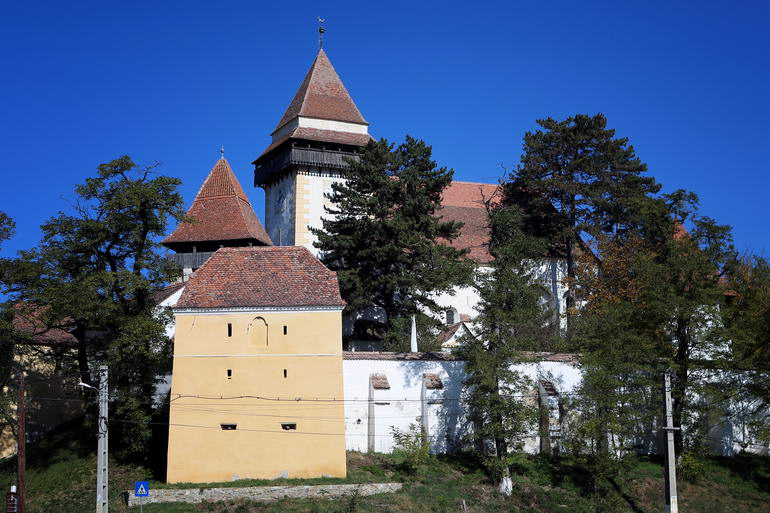 The three-aisles hall church originates from the 15th century, when the aisles of the former Romanesque basilica were heightened. The chancel and the nave were vaulted, and the walls of the side naves were replaced with octagonal pillars. A tower was built for the first time on the western side of the church and together with the nave and the chancel it was strengthened by adding defence levels between 1504 and 1507. From the fortification measures of the 15th and 16 century, the outer ring walls and three defensive towers have been preserved. The inner wall was demolished in the 19th century, but its path it is easy to track on the exposed foundations. On the north side a storage building equipped with loopholes survived the centuries. The church boasts several treasures in its interior: the neoclassical organ altar from 1821, a Gothic tabernacle, the pulpit and wooden galleries built in 1760.

The 13th Century basilica erected in a strategic position on top of a hill surrounded by the river Şaeş, evolved later into the famous fortified church of Apold. The ensemble survived turbulent times and stays even today almost entirely preserved, with fortification walls, defense towers and storage rooms. Since 2004 Corona Association has been looking after the assembly and has carried out careful restoration work. Part of the preservation concept is to train the local people in traditional craft techniques and to involve them in the restoration process. One can get an impression of the changing duties of a castle guardian through times. A few hundred years ago he had to look out for enemies, ring the bells and heat the community room. Today his duties resemble more closely those of a project manager: he is administrator, caretaker and fundraiser; he prepares church services, looks after tourists and organizes concerts and other events.