After the collapse of the vault above the central nave of the fortified church of Alzen the first inventories have begun. The impressions are sad and shocking, but the situation is by no means hopeless. We would like to ask for donations to finance the repairs of the damage caused to the vault, the galleries, the nave and the organ.

You can use one of the following
donation accounts: 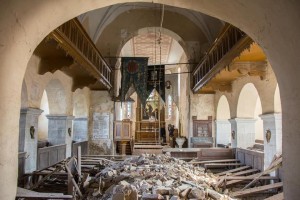 Please specify “Altana” as the intended use on the bank transfer.

We thank all donors for their valuable contribution! 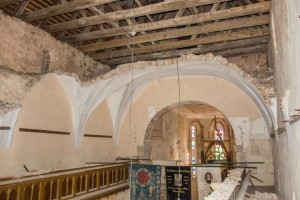 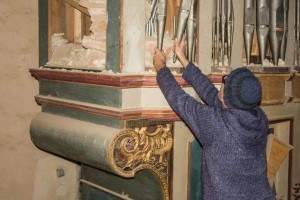 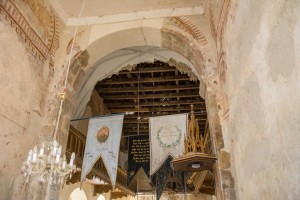 On November 5, Jürg Leutert and Stefan Bichler from the Bishop’s office visited the scene of the accident. Among the damaged objects in the  church is unfortunately the Johannes Hahn organ from 1770. According to first estimates, the instrument is salvageable, large parts can be restored, while other, particularly badly destroyed components may have to be reconstructed. Representatives of the Romanian authorities have also already visited the site on November 5.

Since the church was no longer open for worship services after a crack in the ceiling had occurred, for safety reasons alone, there were no people on site at the time of the accident and fortunately no one was injured. Due to this crack, a delegation of the Fortified Churches Foundation and the Sibiu District Consistory accompanied by an architect and a structural engineer were on site on October 31st to discuss safety measures.

Apart from the mentioned damages to the organ, it was mainly the benches that were destroyed. Brotherhood flags and parts of the wooden side pores are also damaged, but can probably be saved. All elements in the choir area – altar, memorial plaques, baptismal font, choir stalls, pulpit, three flags as well as the valuable wall paintings – remained undamaged.

The highest priority is now the safety of people. For this reason, before any cleaning and recovery work is carried out, it is necessary to obtain assessments from experts who can identify the reason for the ceiling collapse and make recommendations for future plans. The representatives of the parish, church district and regional church as well as the Fortified Churches Foundation are in any case determined to repair the nave once it has been clarified why the original vaulting could collapse.

In its origins, the fortfied church of Alțâna probably dates back to the 13th or 14th century. In the 15th century, the central nave was covered with the vault that has now collapsed. The old, damaged tower was demolished in the 19th century and replaced by the present neo-Gothic bell tower. The Alțâna parish currently has over fifty members.